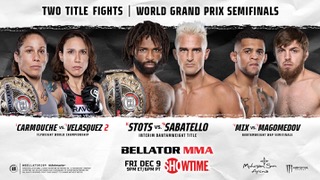 Additionally, wrestling phenom and MMA newcomer Pat Downey (1-0) will look to score his second straight victory against Christian “The Vanilla Gorilla” Echols (2-2) at middleweight, and standout welterweight prospects Kyle Crutchmer (9-1) and former LFA champion Jaleel “The Realest” Willis (15-4) will also clash during the preliminary portion of the show.

The aforementioned contests have been added to a card that already features the continuation of the BELLATOR Bantamweight World Grand Prix Semifinals as Raufeon Stots(18-1) defends his interim championship opposite fast-rising star, the No. 6-ranked Danny Sabatello (13-1) and No. 2-ranked Patchy Mix (16-1) takes on No. 3-ranked Magomed Magomedov (19-2). A BELLATOR Flyweight World Championship rematch between Liz Carmouche (17-7) and the woman she defeated for the title, Juliana Velasquez (12-1) is set for the co-main event slot.

All the action will air LIVE on SHOWTIME at 9 pm ET / 6 pm PT, while the preliminary portion of the event will air free-to-watch beginning at 5 pm ET / 2 pm PT on the BELLATOR MMA YouTube channel, the SHOWTIME Sports YouTube channel, and Pluto TV. Tickets for the event are currently on sale at both Ticketmaster.com and Bellator.com.

No. 5-ranked middleweight contender Dalton “Hercules” Rosta has, like his namesake, conquered every task put in front of him to date. A perfect 7-0 in as many professional fights, Rosta earned the biggest victory of his career this summer when he Superman-punched Romero Cotton into a third-round TKO, settling their long-awaited grudge match in highlight fashion. The American Top Team product combines a well-developed wrestling base with an ever-increasing striking acumen to dominate his opponents, and he will face his first ranked opponent at BELLATOR 289 when he takes on No. 9-ranked Anthony Adams eager to keep his flawless record and place among the division’s elite intact.

Looking to hand the 26-year-old Rosta his first-ever defeat is No. 10-ranked Anthony “Sugafoot” Adams (9-2), who earned a multi-fight BELLATOR contract with his upset victory over Khalid Murtazaliev in September of 2021. Two fights have since fizzled out before the Elevation Fight Team standout could add a second BELLATOR win to his resume, but Adams will be eager to get back to his winning ways against a hyped opponent in Dalton Rosta. Adams, 34, knows that the time for a run at the BELLATOR middleweight title, coincidentally held by Rosta’s teammate Johnny Eblen, is now; a win over Rosta would surely see Adams climb ever closer to a coveted title shot.

In a flyweight matchup with rankings implications, BELLATOR’s No. 7 pound-for-pound female talent and No. 3-ranked contender Denise “Miss Dynamite” Kielholtz (6-4) returns to the BELLATOR cage for the first time since picking up a kickboxing win on October 29. Kielholtz, 33, began her promotional tenure under the BELLATOR kickboxing banner, where she earned acclaim for his striking prowess. As an MMA fighter, she has found similar success; her six victories include five finishes, with the Netherlands native scoring three submissions and two knockouts in a display of her well-roundedness. On December 9, she will look to get back on track and defend her place in flyweight’s upper echelon against Ilara Joanne.

Inspired by the success of her teammates, BELLATOR’s  Patricio and Patricky Pitbull, Ilara “Arya Stark” Joanne (10-6) will seek to break into the flyweight rankings with a win over Kielholtz on BELLATOR 289. The 28-year-old is a proven finisher, totaling four knockouts and three submissions across her ten professional victories. Notably, she submitted Bec Rawlings (8-9) by kneebar to kick off her BELLATOR tenure back in 2019. Joanne returned to the win column in June after a thrilling unanimous decision win over Colombia’s Alejandra Lara (9-6). The Brazilian will look to build upon her momentum and earn a number next to her name with an upset over Kielholtz at the Mohegan Sun Arena on December 9.

A two-time NCAA D-I All-American and Big 12 champion at Oklahoma State University, Kyle Crutchmer (9-1) represents BELLATOR’s penchant for developing high-level amateur wrestlers into world-class mixed martial artists. The 29-year-old American Kickboxing Academy product signed with BELLATOR in 2019 after a blistering start to his MMA career replete with three emphatic knockouts. Crutchmer has been nearly flawless inside the BELLATOR cage ever since, scoring dominant decision victories over dangerous opponents in Levan Chokheli (10-2), Oliver Enkamp (11-3), and Michael Lombardo (12-3). On the strength of a three-fight winning streak, Crutchmer will look to vault himself ever-closer to the divisional rankings with a victory over Jaleel Willis at BELLATOR 288.

Eager to get back into the win column and defeat a fellow prospect in Crutchmer, former LFA welterweight champion Jaleel “The Realest” Willis (15-4). The Tennessee native made an immediate impression on BELLATOR fans when he picked up decision wins over Mark Lemminger (12-5) and fellow LFA royalty Maycon Mendonça (11-6) in back-to-back fights but came up short in his last two outings. The rangy Willis will look to keep Crutchmer at bay in their preliminary matchup as he looks to return to his winning ways and reinsert his name into the conversation in the shark tank that is BELLATOR’s welterweight division.

Back at 185 pounds, former NCAA D-I All-American and NJCAA national champion Pat Downey III (1-0) will look to follow up his sensational MMA debut back in August with a second straight victory inside the cage at BELLATOR 289. The decorated amateur wrestler looked unstoppable in August, winning by arm triangle choke submission just 36 seconds into the first round of his professional career. Downey will look to continue his flawless transition to mixed martial arts against 10th Planet Jiu Jitsu Decatur brown beltChristian “The Vanilla Gorilla” Echols (2-2) on the preliminary card.

Finally, one of Canada’s brightest MMA prospects, flyweight Randi “Rose City Phoenix” Field (3-1), is set to grace the BELLATOR cage in search of her second consecutive victory on December 9 when she takes on Kristina Katsikis. Field, 32, faced fellow top up-and-comer Sumiko Inaba (5-0) in her BELLATOR debut, a sign of just how highly the MMA community viewed her potential in the flyweight division. She earned her first BELLATOR victory in April, defeating Maraya Miller (1-2) by second-round submission as part of the BELLATOR 279 event. She will look to improve to 4-1 with an impressive performance against Katsikis in Connecticut.

Looking to derail Field’s hype train is New England’s Kristina “The Meat Grinder” Katsikis (1-2), 31. Katsikis also made her promotional debut with BELLATOR against Inaba, and she has since frequented the submission grappling scene to test her skills across the combat sports spectrum. Katsikis will return to the BELLATOR cage as the promotion returns to the Northeast, hungry to score what would be the biggest win of her professional career to date against the highly-touted Randi Field on December 9.