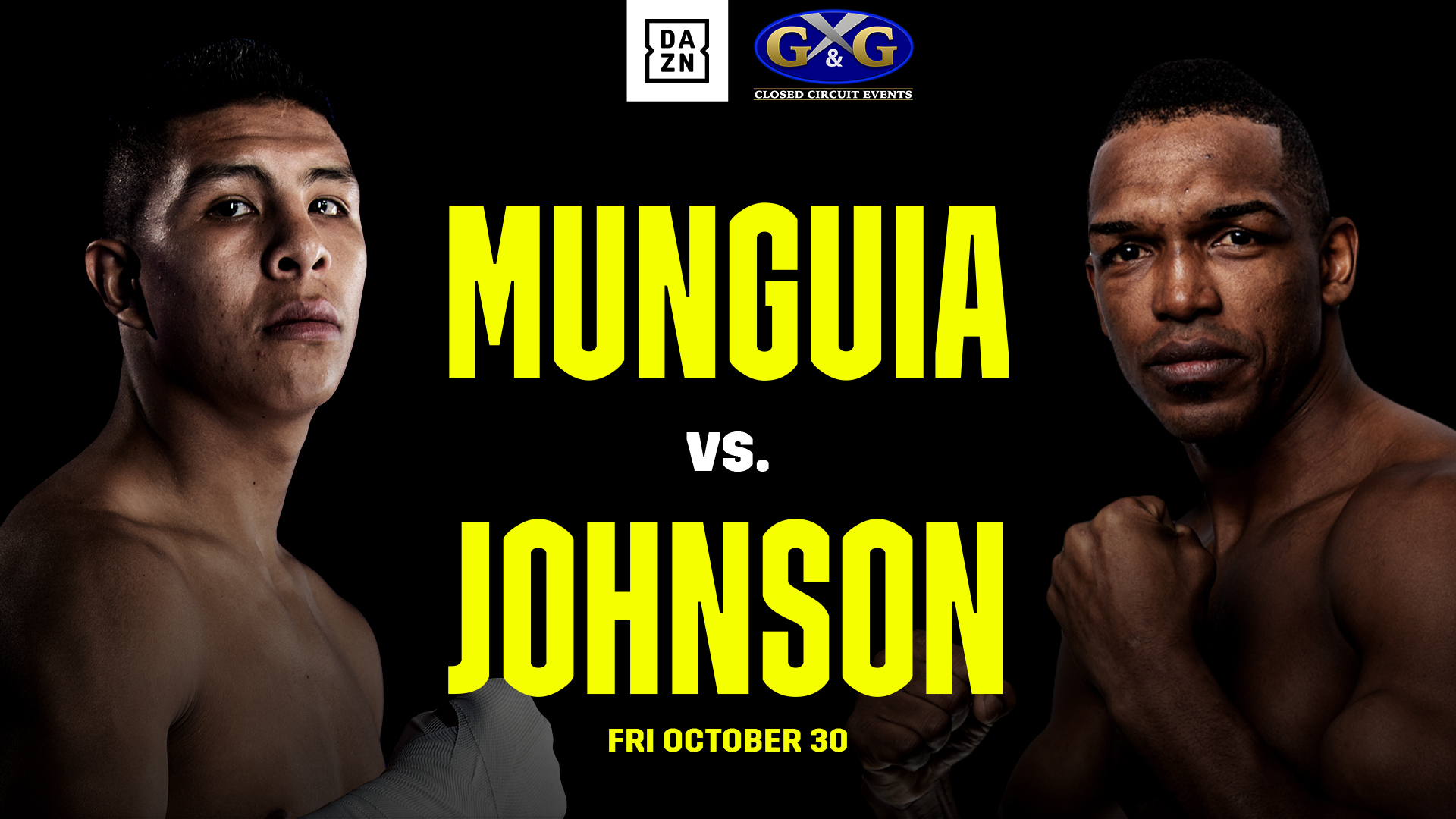 INDIO, CALIF. (Sept. 22, 2020) – Mexico’s rising middleweight star Jaime Munguia (35-0, 28 KOs) will return to the ring to defend his WBO Intercontinental Middleweight Championship against Tureano Johnson (21-2-1, 15 KOs) in a 12-round battle on Friday, October 30 at Fantasy Springs Resort Casino. The fight will be streamed live exclusively on DAZN.

Additional information for this card will be announced shortly. The event will be closed to the public and media.

“Jaime Munguia has all the qualities to become Mexico’s biggest boxing superstar,” said Oscar De La Hoya, Chairman and CEO of Golden Boy. “He’s tough, charismatic and has the physique to win world titles at both middleweight and super middleweight after a successful reign at 154 pounds. However, Tureano Johnson is coming off an impressive knockout win against Jason Quigley in which he handed him his first loss, something he definitely wants to do against Munguia as well. This is a veritable crossroads fight, and the winner will cement his case for a world title opportunity and be a threat to any of the champions.”

Munguia is a 23-year-old contender of Tijuana, Mexico who catapulted to the highest levels of the 154-pound division by knocking out Sadam "World Kid" Ali in May to capture the WBO Junior Middleweight World Title. Munguia then defended his title against Liam "Beefy" Smith, Brandon "Bad Boy" Cook, Takeshi Inoue, Dennis Hogan and Patrick Allotey. After five defenses at junior middleweight, Munguia moved up to 160 pounds to capture the WBO Intercontinental Middleweight Title against Gary “Spike” O’Sullivan. Now, he’ll face his toughest test to date against a battle-tested warrior Johnson.

“It’s a great honor to be returning during these tough times,” said Jaime Munguia. “I hope to deliver excitement and entertainment to the fans as the world begins to slowly make its return to normalcy. At the same time, I have been training and improving my skills with my team at the Ceremonial Center in Otomi [Mexico], and I will show everyone that Jaime Munguia is ready for the best in the division.”

“I am very happy and excited,” said Fernando Beltran, CEO of Zanfer Promotions. “With so many issues that are taking place on a global level, it is an honor to have the most charismatic boxer in Mexico in Jaime Munguia returning to the ring.”

Johnson is a 36-year-old contender who hopes to fight for a world title despite some setbacks in his career. Johnson's only losses were against Curtis "The Cerebral Assassin" Stevens and Sergiy "The Technician" Derevyanchenko. After a very tough battle against Fernando "El Huracan" Castaneda in February, the native of Nassau, Bahamas bounced back by handing Jason Quigley his first loss and capturing the NABF Middleweight Title. Johnson is eager to show everyone that he is world championship caliber.

“I am excited about the opportunity to fight Jaime Munguia,” said Tureano Johnson. “The setbacks I have had in my career have only made me stronger. Munguia is a tough undefeated fighter, but I will hand him his first defeat as I pursue my quest to be the middleweight champion of the world.”

Munguia vs. Johnson is a 12-round fight for the WBO Intercontinental Middleweight Title presented by Golden Boy in association with Zanfer Promotions. The event is sponsored by Hennessy "Never Stop. Never Settle" and “BetOnline - Your Online Sportsbook Experts." The fight will take place on Friday, October 30 at Fantasy Springs Resort Casino and will be streamed live exclusively on DAZN